” And we’re off to the beach! ” Pomi  came running down the hall, climbed on the table, jumped and landed in my bag. ” Do not zip me up.” He said while tying a scarf around his neck. 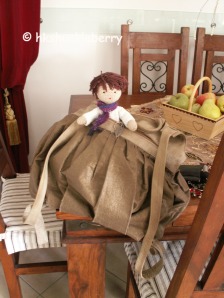 ” Never been more ready than this!” Pomi said adjusting the scarf. I shouldered my bag and we left the house. It was a beautiful day, the sun was shining bright and there was not a single cloud in the blue winter sky.

” Daa da daa la li loo.”  A happy  Pomi sang as I walked, while the bag over my shoulder was swaying slightly with  every step.

Gradually the singing died down: Da…la…la’ until it stopped altogether.

“What happened my darling? Why did you stop singing?”

” Why don’t you crawl into the bag, close your eyes and try to sleep. I will wake you up as soon as we arrive at the beach.

“Rough seas.” I heard Pomi’s little voice as I zipped up my bag. About half an hour later I opened it again and  the little darling was fast asleep.

My bad sailor reluctantly opened his eyes, looked at me, slowly got up, then looked about and when he realized where he was Pomi hopped out of the bag and started to run towards the sea. I followed him but he was much faster, climbing over fences instead of walking around them along the promenade.

“I want to go there!!! ” Pomi shouted, clinging to the wire mesh, nodding towards the life guard tower. 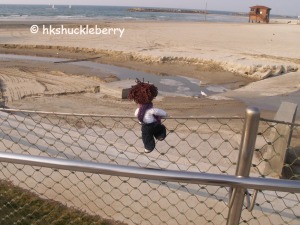 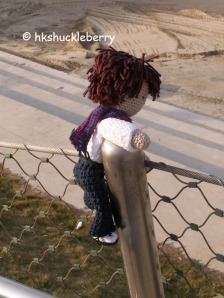 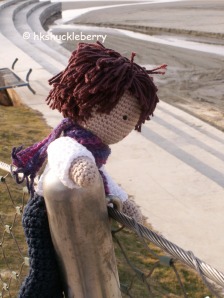 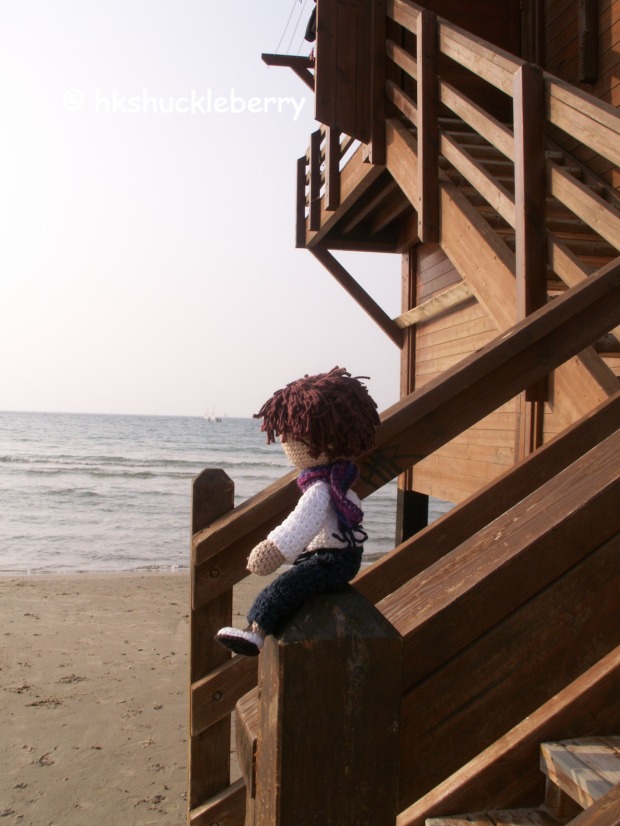 We sat  at the life guard tower for a while but Pomi got tired of just sitting around so he got up and ran on.

“A boat? Where?”
” Right there!”  Pomi exclaimed pointing straight ahead. “Do you think it is a freighter? Or a coaster?”

” Of course you don’t because it is gone now.”

“Why don’t you stop running and sit down in the sand for a while?”

” And build a sand castle. For you.” Pomi smiled at me.

My little crochet guy played in the sand and I sat next to him enjoying the not so mild winter afternoon until we decided to go home. We walked by a couple of beach restaurants and Pomi tried the various chairs.

But it was too cold to enjoy sitting in them.  The sun started to set and a chilly breeze was creeping up.

” So tell me my little darling, how do you like the beach?” I asked m y tiny friend.

” I love it but I am cold. Can I sit in the pocket of your jacket?” Pomi was shivering .

“Of course you can. Come on. Make yourself comfortable.”

Pomi squeezed himself into my pocket his legs sticking out.

” Not like that young man. Climb into the pocket.”

” In that case…” And without finishing the sentence Pomi slipped his legs into the pocket and pulled up the zipper . 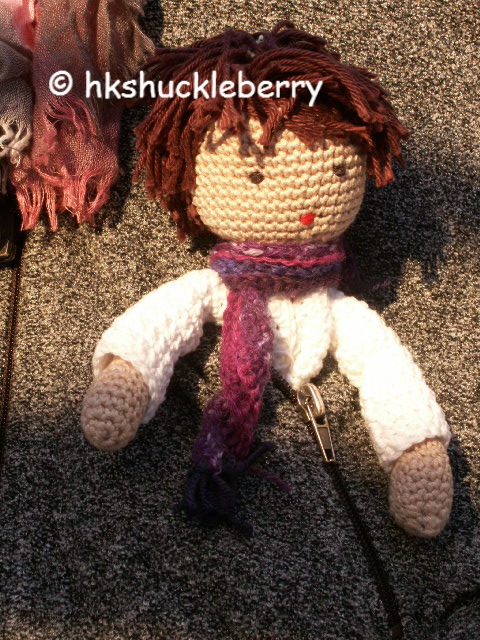