“Do you think it is going to snow?”

” No, I don’t think so. We always hoped for snow in December but  snow never came.  Year after year  December would be rainy and grey . We never saw a White Christmas. ”

” I still wish it would snow. I will pray for a miracle!” Pomi said.

” Ok, you do that.  But it is time to sleep now.  It was a long day. Good night young man.” I said to my little crocheted friend and turned off the light.

When I pulled up the shutters the next morning it was raining. Well not exactly. There were raindrops but  amidst them there was the occasional snowflake slowly tumbling down from the sky and melting as soon as it met the ground.

Little Pomi opened his eyes, looked up and gave an excited shriek. He crawled towards the window his little mouth wide open with amazement.

and you will get all wet and maybe catch a cold.” 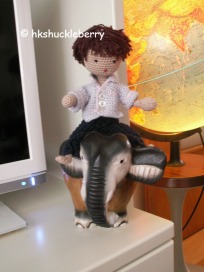 And really Pomi did not talk to me for a couple of hours, instead  he started to explore the new surroundings.

From time to time he went to the window to look outside and I heard him talking to himself:

“Sleet. What is that anyway?”

Then suddenly he  climbed on the sofa. Sitting down leaning against a very British pillow, perfect with the Royal crown and the British union flag,  Pomi said with a grin.

← Going Away
Snow at last →