Under the bougainvillea  there was  my little Pomi  examining  something. From far I could not make out what it was. It looked like a bit of dirt but as I came closer I realized that it was something completely different. 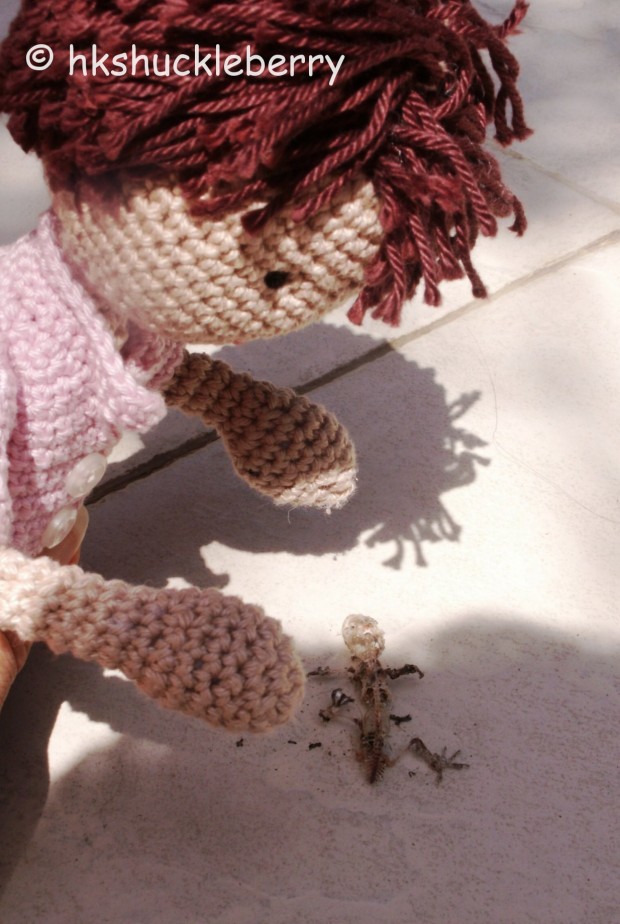 “Look at this.” Pomi   sounded excited. “Look what I found! It looks like a skeleton.”

Pomi  gave me a questioning look.

” This was a house gecko, a very small lizard. They are very common all over the Mediterranean and are even mentioned in the bible in the book of proverbs :  ‘And the lizard that clings with its hands and dwells in Kings’ houses’.

” I think they are rather cute with their big protruding eyes, an almost see-through underbelly and those peculiar feet which have an enormous gripping power. They can walk up smooth surfaces effortless, scurry up walls and stick to ceilings because their feet are sticky with tiny adhesive pads that glue them down.”

” Thank you professor.” Pomi smirked. ” But what happened to this one then? How did it get here?”

” Which is why  I have never seen one. I sleep at night, you know.”

” I know Pomi and so do I. But our cats don’t. They too are up at night looking for prey.  So this little fellow here must have fallen victim to one of the cats because you can see that it has no tail. Geckos drop their tails in self defense and that way manage to escape, leaving the cats with nothing but a tail in their paws.”

” This one didn’t get away. It must have been here for some time. On second thought, it could not have been because you are cleaning all the time. You are out of control.”

”  Say thank you for your feet unlike the gecko’s are not self cleaning. As for the skeleton  I don’t think it has been here for more than a day.  Ants cleaned the carcass of all the flesh leaving only the bones. Then they left. I have seen it before. Ants are very fast workers and before you know it they disappear.”

” Sure. And by now they are probably all back in your kitchen.” Pomi giggled.

” Wait until they find your ‘secret’ supply of chocolate.”

← Better Safe Than Sorry
May I Have This Dance ? →

9 thoughts on “On Geckos”